Ladies and Gentleman, meet the woman, the myth, the legend–Lady Stardust:

I have never seen a more relevant (in my eyes) Halloween costume. I love Halloween because people get to be whatever they want to be in front of everyone. I think we should celebrate Halloween all the time–maybe it would give us all permission to actually be what we want to be without fear of reprimand or scorn. That is, unless, you want to unearth your secret racism or misappropriate cultural stereotypes for your own gain. 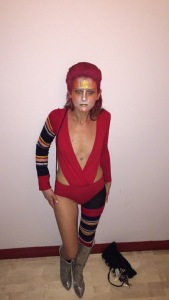 I’d like to wear more glitter and colorful hair. I’d also like to wear full body suits with high-heeled boots like Nicole did, because I think it would make the world a better place (just like she does). Halloween is a good exercise in the IDGAF mentality. David Bowie created an alter-ego in Ziggy Stardust because he did not give a fuck. His rock star persona made him a rock star because he took outrageous liberties when he cultivated this other-wordly character.

So when I gave no fucks, like Nicole and Bowie, yesterday turned out to be the best Halloween I’ve ever had. I joined my friend Fancie while she officiated a wedding in Chester. We traveled to the couple’s home where they were married in the back yard with their close families and friends. They stood next to the grave they made for their dog “Nicholas Cage.” The lovers were tattooed from head to toe, grinning from ear to ear with excitement and love. It was one of the sweetest things I’ve ever seen. The couple dressed as devilish ghouls and they looked amazing. They were so nervous, but their vows were heartfelt and I could feel their love for each other. It was an honor to be a part of such a rad wedding celebration. No one questioned the woman dressed as a Pineapple taking pictures for them on everyone’s iPhone.

The only thing that trumps not giving a fuck is spending Halloween sober. I am so grateful to have my second sober Halloween in the books. Holidays–even the silliest ones–are tough for recovering addicts and alcoholics sometimes. Every now and again I get euphoric recall about the fun I had getting wasted with my friends. What I have to remind myself, however, is the unfun I had walking home alone getting lonelier and lonelier with every step. Half the time I ended up on some stranger’s couch, confused and disoriented as to how I got there. Even if I started the night out with my group of friends, I almost always ghosted them to stay out later at the bar or to go home with a stranger. I’m sure they were worried about me, but I didn’t have enough others-centered thoughts to care.

I look forward to dressing up for Halloween next year. Maybe in the near-future, I will be dressing up my toddlers in cute costumes. Half the fun of Halloween is getting to see my friends’ children dress as mini cupcakes, lions, Forrest Gumps or elephants. Me as a mother is a real-life costume I wouldn’t mind trying out. 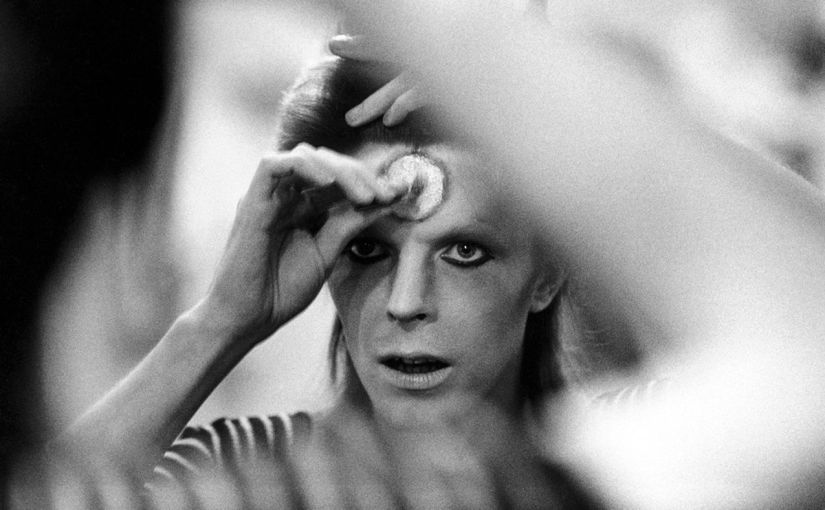 I had the best/worst Halloweens in Los Angeles.

In 2012, I joined my friend Molly as an “egg” to her “bacon.” We got schwasted at the Cha-Cha Lounge in Silverlake, along with every other 20-something in the city dressed as Sexy R2-D2s. We finished the night strong at 4100 bar, where I met my ex-Mormon-future-boyfriend-future-future-ex-boyfriend after puking in the bathroom from too many pickle-backs. Romance is not dead.

In 2013, I dressed as a Voodoo Doll. This was a lonely night for me, even while standing next to my High Priestess and several million San Diego friends. I ended that night passed out on a couch outside.

In 2014, I had my first sober Halloween. I met my program friends for a scary movie night, where I won the costume contest for my “Blackmail” costume. I was a nervous wreck all night, but I went to bed by 1am–without the spins.

This year, I’ll be joining my good friend, Fancie, for a Halloween-themed wedding where she will be the officiant. I’m going as a Pineapple, because it’s the fruitiest fruit and I can make my hair green. Pictures forthcoming.

The most exciting part of this Halloween is not my costume depicting one part of a balanced diet; I get to witness my spiritual love nugget transform herself into Ziggy Stardust. Nicole is one of the coolest people I’ve ever met. She teaches me how to respect myself, to own my naughties and niceses, and how to be an unapologetic badass.

When I discovered David Bowie as my Higher Power, I promised myself I would never try to dress up as him for Halloween. So it could not be more perfect that the Iggy to my Ziggy would announce this year as her year to become Bowie. She is currently on the hunt for the perfect, high-intensity boots.

“I’m doing this. Because I know exactly what I’m doing.”

This is Nicole in her one-of-a-kind unitard. Between the two of us, we could not fucking figure out the difference between a leotard and a unitard. But, I digress. I will unveil her costume in these next couple of days leading up to Halloween.

Update: No news on her shoes. This evening, we attempted to figure out what kind of foot shape she is. Pear? Banana? Apple? Who the hell knows. Her friend, who is shoe-knowledgeable, offered these fruit-themed foot shapes as reference points. Wish her luck.